December 21, 2017 – An electrician sustained serious burns from an arc flash while installing and testing breakers at a manufacturing plant in Fargo, ND.

AP states: OSHA Area Director Eric Brooks told KFGO radio that George Gouniks was burned by an arc flash while he was installing and testing breakers at the Integrity Windows plant.

Brooks said the initial report showed that Gouniks sustained burns to his arms, neck, elbow and upper torso. He was taken to Hennepin County Medical Center in Minneapolis.

January 21, 2017 – OSHA launches inspection into incident in which one worker died and another was hospitalized in critical condition from arc flash at a construction site in Amarillo, TX.

The report states: At about 1:00 p.m. on January 21, 2017, Employees #1 and #2 were performing electrical work inside an electrical room at a facility. They experienced an electrical arc flash that resulted in an explosion and fire. The employees were taken to Northwest hospital in Amarillo in critical condition for treatment and transferred to University Medical Center (UMC) burn center in Lubbock. On January 22, 2017, Employee #1 died.

The report states: U.S. Department of Labor Occupational Safety and Health Administration inspectors opened an investigation on Oct. 27, 2015, after learning an electric arc flash injured a worker at Georgia Power’s Plant Bowen generating facility. When the arc flash occurred, a 48-year-old electrician was working on an electrical cabinet that was still powered. The ABB Inc. employee suffered second and third-degree burns to his hands, arms and torso.

Georgia Power received two repeated, five serious and two other-than-serious safety citations. The repeated violations relate to the employer failing to ensure the electrical cabinet was not powered down before allowing work to begin and not developing specific steps to power down machinery and prevent starting up during maintenance and servicing. Georgia Power was previously cited for similar violations in 2014 at this facility.

The company’s serious arc flash violation relate to its failure to:

ABB Inc. was issued two serious citations. The serious violations relate to the employer’s failure to coordinate with other employers on the specific requirements of removing power from equipment before maintenance and servicing and exposing workers to electrical hazards.

Avoid Injuries and any such Arc Flash Violation, take proper steps to prevent Arc Flash Hazards for the safety of your employees.

Investigators have found no evidence of foul play in Sunday’s fire at Hartsfield–Jackson Atlanta International Airport which caused a power outage that forced cancellation of hundreds of flights and stranded thousands of travelers.

“Firefighters investigated every location where smoke was seen, and identified a single point of origin … an electrical failure inside of a switchgear box located in the long below-grade tunnel which runs beneath the airport concourses,” Atlanta Fire Chief Joel Baker said Tuesday afternoon. “A subsequent intense arc flash ignited surrounding insulation and other combustibles inside the box.”

Atlanta police and fire investigators have concluded a preliminary investigation, working with the federal Bureau of Alcohol, Tobacco and Firearms and the FBI’s Joint Terrorism Task Force. We work to report Georgia Arc Flash incidents and Florida Arc Flash incidents for transparency and safety of the community.

Baker said they found no evidence to suggest an insider threat or any connection to terrorism with the airport arc flash incident.

Georgia Power Co. restored power to all concourses and for all flight operations at the Airport shortly before midnight Sunday, although the trains connecting the main terminal with passenger gates remained out of service into Monday.

Delta CEO Ed Bastian estimated that the incident cost Delta between $25 – $50 million in lost revenue from the power outage not including hotel reimbursements for the 1,400 flight cancellations.  This should cause the airport and all other businesses to ensure their staff are well-trained.

Similar to Georgia, Arc Flash Consultants in Florida are heavily relied on to ensure proper steps are taken to mitigate accidents from occurring. Florida Arc Flash consultants can be reached here.

Arc flash refers to an accidental phenomenon, wherein a flashover of an electric current leaves its path and flows from one conductor to another or to the ground. The result of this mishap is often violent; if a human is in vicinity of the arc flash, it may cause perilous injury or even death.

Arc flash systems protection essentially refers to the systems or equipment used to identify and mitigate the arc flash hazards. Arc flash is the major cause of injuries, occurring due to electrical accidents taking place at manufacturing, construction, and industrial sites.

Arc flash hazards are caused by corrosion or deterioration of equipment, dust accumulation leading to material or equipment failure, condensation, and faulty installation. The market for arc flash protection is expected to gain momentum, led by the implementation of stringent regulations such as The 2018 NFPA 70E Standard and OSHA, increasing electrical safety awareness, and the inculcation of safe working habits among workers.

Rise in demand for power generation is expected to significantly influence the arc flash protection market due to the current power deficit scenario, especially in Asia Pacific. The power generation industry involves activities that may lead to electrical accidents and arc flash injuries. Furthermore, the market for arc flash protection is expected to expand significantly in the near future due to the increase in need to maintain safe working conditions in order to ensure safety, health, and welfare of people at work.

Stanco Manufacturing has produced this lightweight arc flash suit which has a total fabric weight of only 11 oz/yd2 to help keep the wearer cooler. Personal protective equipment (PPE) is protective clothing, helmets, goggles, or other garments or equipment designed to protect the wearer’s body from injury or infection.

Sized for ease of movement, it offers more protection in a lighter weight. This Arc Flash Suit is compliant with NFPA 70E CAT4, ATPV 44 cal/cm2. A hood with an integrated air flow system is also available. 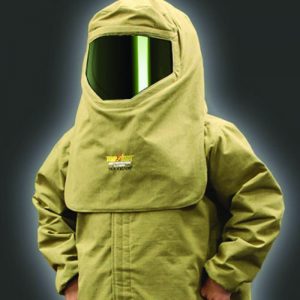